the death and the strawberry 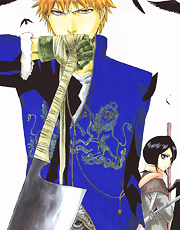 We fear that which we cannot see

Bleach (ブリーチ) is a Japanese manga series created by Kubo Tite. Since August 2001, it has been serialized in Weekly Shounen Jump, and on January 2002, the first volume of the series was published by Shueisha and released in Japan. On June 2004, VIZ Media released the English version of the first volume, and has since published subsequent volumes of the series in the English language.

From 2004 to 2012, Bleach was also made into an anime series by Studio Pierrot. In addition, the series has also been adapted into four animated feature films, several musicals, and a number of video games.

Bleach follows the story of Kurosaki Ichigo, a teenager who is able to see ghosts. By chance he meets Kuchiki Rukia, a Shinigami who is currently in pursuit of a Hollow, an evil spirit that attacks and devours the souls of the living and the dead. When the Hollow she is hunting attacks Ichigo’s family, Rukia is wounded during the encounter and is unable to fight. To save his family, Ichigo agrees to follow Rukia’s plan and obtains her Shinigami powers. As a result, Ichigo becomes a Shinigami, and a new life begins for him, filled with different responsibilities as well as new adventures.


Without her powers, Rukia is unable to return to the Soul Society, the spirit world where the Shinigami live and most souls stay until they are reincarnated and return to the Human World. The transference of her powers to Ichigo does not go unnoticed, however. As it turns out, her actions are a grave offense to the laws of the Soul Society, the consequence being death for her and Ichigo.

Months after her encounter with Ichigo, two Shinigami, Abarai Renji and Kuchiki Byakuya, come after Rukia, intending to take her back to the Soul Society to face execution. Although Ichigo attempts to stop them, he is ultimately defeated and Rukia is taken away. Unwilling to let her die, he, along with his friends, infiltrate the Soul Society to rescue her.